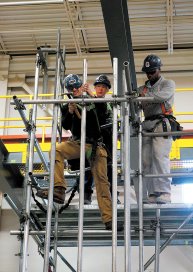 In 1954, the province of Newfoundland hired its first safety officer on a three-month contract and two years later they sent a safety person to workplaces in remote communities by boat to deliver first aid supplies.

Safety standards improved slowly but steadily in the decades to come, but in the last 20 or so years the industry started taking the issue more seriously. In Newfoundland, for example, lost-time injury rates per 100 workers dropped to 1.8 last year from a rate of 6.3 in 1996, the year the Newfoundland and Labrador Construction Safety Association (NLCSA) was founded.

Chalk the change largely up to a shift in attitudes, says Jackie Manuel, CEO of the safety association.

Over the last two or so decades associations like the NLCSA have developed hazard-specific training courses such as fall protection, working in confined spaces and transportation of hazardous goods.

Increasingly training has come about because of provincial regulations and, as a case in point, mandatory training standards introduced in Newfoundland in 2010 set the bar high on the “quality and calibre of training being delivered” to workers, explains Manuel.