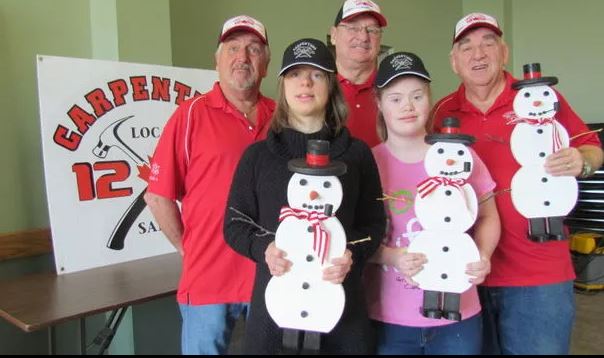 A wooden snowman that caught Alex Ralph’s eye in a Sarnia store led to a conversation and a partnership with the Down Syndrome Association of Lambton County.

On Tuesday, Ralph and other retirees with the carpenters union are set to be at the Local 1256 hall in Sarnia with 25 young people gathered by the association to assemble their own snowman.

Helen Van Sligtenhorst said Ralph came into her store, Harbour Bay Clothing, and saw a wooden snowman displayed there her daughter, Abby, had made at a “Daddies and Daughter” event.

It was an opportunity Abby’s older sister, Sydney, who was born with Down Syndrome, missed out on.

Van Sligtenhorst is vice-president of the association, a group that has been active in the community for several decades.

“Our goal is to be inclusive,” she said.

While talking with Ralph, “I just mentioned it would be nice for our kids to experience working with screw drivers and hammers and all that stuff,” she said.

Van Sligtenhorst said Ralph suggested asking the union to cover the cost of materials, which it agreed to do.