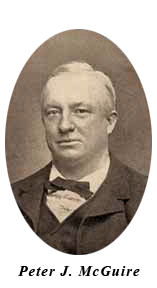 Carpenters have played an important role in labour history. In fact, they were one of the first groups of North American tradespeople to form unions, almost always in the face of fierce opposition from employers and governments. Their courage and successes inspired other workers to organize.

Our first leader, Peter J. McGuire (1852-1906), is recognized as a major trade union pioneer. He was one of the first to call for a national labour federation to strengthen the movement. He also played a big role in bringing together the various local carpenters’ unions that ultimately formed the Carpenters’ Union. McGuire proposed the idea of Labor Day as a U.S. national holiday in 1882, after a visit to Toronto, where parades celebrating Labour had been held for several years.

Among many other achievements, McGuire led a successful strike of carpenters in St. Louis for the eight-hour day. He was a Vice-President of the American Federation of Labor for nearly 20 years.

1881: In August the United Brother of Carpenters and Joiners of America was formed, led by Peter J. McGuire, one of the great labour leaders of the 19th century.

1882: Local 18 in Hamilton becomes the first Local outside of the United States to join the UBC, transforming the Brotherhood into a truly international organization.

1882: Local 27 in Toronto was established as an officially chartered Local of the Brotherhood on April 18th, 1882 shortly after Local 18 received its charter.

1884: The official emblem of the United Brotherhood of Carpenters and Joiners of America is created at the Fourth General Convention in Cincinnati in August. The motto:” Labor Omnia Vincit” is Latin for “Labor Conquers All Things.”

1929: The 1929 American Federation of Labor Convention was held in Toronto and included the “largest gathering of carpenters at one celebration in the Dominion of Canada.”

1953: On November 4th, the Brotherhood of Local 27 and the Council in Ontario moved to their new home at 169 Gerrard Street East, Toronto, across from Allan Gardens. At the time, the Globe and Mail newspaper hailed the new complex as “a monument to fine craftsmanship.”

1984: The Council purchases 64 Signet Drive in Toronto as their new home. The building was dedicated to then-UBC General President Patrick J. Campbell (1918-1998).

2004: An impressive new home for the Council in Vaughan was opened officially on June 2, 2004.
We have archived the major events and people in our history book: The Carpenters’ Union in Canada: Looking Back with Pride – Looking Forward with Vision -125 Years of History.

View our Incredible History Book in PDF:
The Carpenters’ Union in Canada: Looking Back with Pride – Looking Forward With Vision -125 Years of History