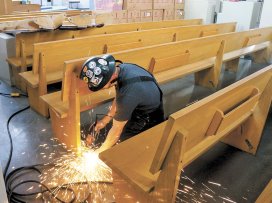 The Archdiocese of Toronto was willing to donate the pews but that still left the Rankin Inlet priest perplexed about how to cover the cost of disassembling them in Toronto, customizing them to fit and then shipping them to their new home in the north.

Raising the money locally was not an option.

Reilander turned to Ucal Powell, who sits on the board of directors for Catholic Missions In Canada, for assistance.

Powell, the former executive director of the Carpenters’ District Council of Ontario, called on members of Carpenters’ Local 27 to donate their time to disassemble the heavy oak pews at the former church, known as St. Catherine of Siena, on Danforth Avenue in Toronto.